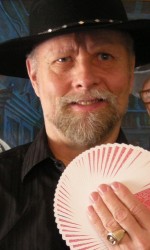 The following article by Iris Dimmick was posted on the Rivard Report on September 2, 2013:

Richard Turner is explaining how to cheat at playing cards to a little boy as I approach the velvet table.

He perfectly shuffles a deck of cards while describing the late-1950s television show, “Maverick,” as the inspiration for his craft. “Perfectly”

as in each card from each hand interlace seamlessly – one by one.

Turner was about the same age as the boy he talks to when he began to idolize Bret Maverick, played by James Garner, the charming, articulate Texan card shark who traveled throughout the American Old West with a good heart, but a weakness for women, money, and especially both.

He’s shuffling, removing cards from the middle of the deck with a flip of his wrist, flipping aces on the table, re-shuffling – all the while keeping conversation and eye contact with the curious boy.

I slip into the chair in front of Turner and ask if I can eavesdrop; it feels strange not verbally making my presence known.

“Of course, of course!” Turner says, smiling, and continues to finesse the deck of cards and tell the boy and I stories from his childhood.

Later, he leans towards me to say: “I’m always practicing – on average 14 hours a day . Liberace couldn’t carry his piano with him . but my act can fit in my pocket.”

He looks me in the eyes and winks before leaning back to shuffle and tell us about his black-belt in Karate – in addition to his 30 years in the entertainment business.

Richard Turner is blind. He has performed for Jimmy Stewart, Muhammad Ali, and former Secretary of State Colin Powell. He’s an honorary U.S. Naval Flight Officer and U.S. Air Force Honorary Commander. He also has made a brief appearance a Brad Pitt film. And he lives in San Antonio.

Most people don’t know any of those things. More than 20 potential investors and friends gathered at Geekdom in the Weston Centre last Thursday night to meet the man and be entertained by this master “card mechanic.”

These potential investors aren’t investing in his ability to return large profits from card games and shows – he’s pretty much retired save for a few shows a year in Los Angeles’ Magic Castle and a few private parties at San Antonio’s own Buckhorn Saloon & Museum. While a biographer is putting the finishing touches on a written account of Turner’s life and skills, filmmakers from Austin are gearing up to start filming a full-length documentary – if they can secure funding.

“Dealt” is the working title of the documentary about a man who has learned to deal with the hand he has been dealt in life.

Turner began to lose his sight at age nine, was teased mercilessly by his peers, had a bout with drugs and anger, but found an “increasingly refined God-given sense of touch” which he nurtured and worked hard to master and use to entertain audiences around the world. It seems like he knows where every card is on the table and in the deck. He demonstrates over and over again to the audience that, if he feels like it, he can make pretty much make any card appear in any location.

“‘D’ is for dreams . ‘E’ is for excellence . ‘A’ is for analysis . ‘L’ is for loyalty . and ‘T’ is for tenacity,” Turner said of the proposed film title and the themes defining his success in life.

Based on the looks on the faces of the kids and adults in the room, the producers probably won’t have to worry about funding. Another factor: the filmmakers’ resumes aren’t too shabby either – they’ve already completed a powerful full-length film about Lord Edward Montagu that’s receiving rave reviews in the international film festival circuit. Lord Montagu assumed office in the House of Lords in 1947 as the youngest member of the British Parliament. It was when he opened up the 7,000 acre estate in Beaulieu, Hampshire to the public and shortly after was put on trial and served 12 months in prison for “homosexual activity” in 1954 that he received both national and international attention.

“Lord Montagu” writer and director Luke Korem had started the project as a small family film for his then-employer chairman and co-founder of Rackspace, Graham Weston. Korem had been working in commercial advertising and became the hosting company’s first videographer. Weston just so happens to be Lord Montagu’s nephew. When he asked Korem if he’d look into his family’s history, Korem jumped at the chance. What started out as short private-interest film became a full-length documentary.

Korem also has a strong connection to the world of magic.

“His dad called me,” Turner said. “(Korem) grew up hearing my name around the house . his father was a magician – we actually knew each other.”

Turner had been approached by other filmmakers before, but it was this family connection and Korem’s experience that ultimately made up Turner’s mind. He has an intense, emotional, and multi-faceted story to tell. It certainly needs to be done well, with people he can trust.

Korem graduated from Texas A&M in College Station, while “Dealt” co-writer Bradley Jackson and Producer Andrew Lee both attended the University of Texas in Austin.

“But San Antonio is where primary funders are,” Korem said. While they’ll be shooting much of the film here, they’ll get to travel to places like Las Vegas, Los Angeles, Montana, and Costa Rica to speak with Turner’s friends, family, and fellow magicians.

Turner also has agreed to allow Korem and his crew to film his tricks and slights of hands at any angle, through glass tables, and in slow motion – in an effort to entice curious card connoisseurs (and perhaps fellow magicians) with the possibility of seeing how Turner does it.

“They can record me all day long,” Turner says with another wink of confidence. “I don’t care, no one can do what I do.”

He’s calm, easy to talk to, has a quick and funny one-liner for just about any question you could ask him, and while once in a while he’ll be looking just beyond your forehead – he has developed the ability to predict where your eyes are.

What he’s most interested in getting out of the film project – besides being able to spread his inspirational message – is being a guinea pig of sorts for medical doctors. Turner has developed a rare condition that allows him to “see with my mind’s eye,” he said. “It’s like looking at a kaleidoscope .

I see the most brilliant colors and shapes . and can arrange them into phone numbers (or words). or complex building plans so I can remember them later.”

All thanks to his eidetic (photographic) memory.

“To be able to see everything makes us lazy . sight dominates our brain,” he said of how his enhanced touch sensitivity and ability to “see without sight” evolved over time.

Scientists have yet to explain this phenomena. “They’re going to hook me up to machines and take a look at my brain,” he said. “It’s fascinating from a medical standpoint, who knows what they’ll find in there.”