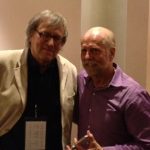 “At my table is Dai Vernon’s traveling friend Bill Bowers. Bill, I heard about Herb Zarrow’s party in New York, can you please elaborate on the highlights?”

“Sure, Jon, Herb invited a large group of magicians to have dinner at a New York hotel dining room. Sitting next to Dai Vernon was his best friend Richard Turner, who is never without a deck of cards in his hands. Vernon suggested that Richard show everyone his latest card effect. Richard passed his deck of cards around the table to be shuffled by some of the greatest card magicians ever. When Richard was given back the deck, he began producing the four aces, one at a time, each using a different method. Richard got up to use the restroom. While he was gone, his deck of cards was passed around and examined, magicians shaking their heads from side to side indicating that, looking for marked cards, gaffed cards, short cards, etc., hoping to discover just how he was able to perform such a beautiful card routine, they couldn’t find a thing wrong with the cards. On the return flight Professor told me ‘that was the highlight of the night watching all those top magicians flustered when they couldn’t find any work on the cards.’

I can never remember The Professor heaping so much praise on a performer as he did to his best friend, Richard Turner.”