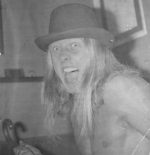 “At my table I’m interviewing some of the first members of the Lamb’s Players theater troupe and they are, Lynn Hansen, Glen and Bernelle Hansen, and actor Randy Baker. Can you each share some of Richard’s early characteristics?”

“Yes, Jon,” Lynn Hansen says, “in 1972 we just made the migration from Minnesota to California looking for actors for the troupe, and Rick was the first person we met. In my mind I can still see the first time we saw him sitting cross-legged in the middle of the floor of his apartment staring into space.”

Bernelle says softly, “Rick’s personal appearance was what stood out at first; he had a head of wavy blonde hair down to his shoulders that looked like it had not seen a comb in a while, and a tanned, muscular physique on a rather small body that was rarely covered up with a shirt.”

“Jon,” Glen Hansen observes, “He was eighteen years old and, while he had a childlike innocence in many social areas, he was totally street smart.”

“Ha!” Baker says with a scoff. “Rick’s rough edges made me wonder about the sincerity and depth of his spiritual understanding and faith.”

“Yeah,” Lynn chuckles, “He would stand at the back of the room practicing his kicks while we were in prayer-and-share!”