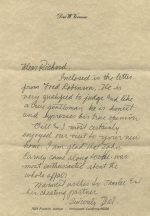 Breaking into the magic meritocracy starts when Lamb’s Player’s director Steve Terrell sends me to Hollywood to train with stunt-man, Bobby Yerkes. (Yerkes’ career is impressive. In 1947 he appeared with Elizabeth Taylor in his first film, Julia Misbehaves. Everything afterwards was a non-stop, rough-and-tumble adventure. Yerkes served as a stunt double for many of Hollywood’s greatest actors and can be seen in thousands of films and television shows.) Yerkes’ backyard looks like a full blown circus, complete with a trapeze, high wire, air-bags for high falls and every possible piece of equipment for stunt-work. It is always buzzing with world-wide circus performers, stunt men and women, and TV and film celebrities of every caliber.