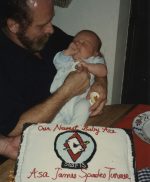 After returning to the States, Sensei married a beautiful Hispanic woman, Rosemary. “As you train, you will notice that, during nightly fights,” Douglas says with a sly snicker, “Rosemary has the thankless job of mopping up the blood from the wooden floor so that nobody slips and is unnecessarily hurt.” Douglas continues, “Sensei wanted his testing criteria to earn a black belt to be the toughest in the world. Along with katas and weapon training, your first belt…‘yellow’… will be one three minute fight; your green belt will be five two-minute rounds with five different opponents; and your brown belt will be ten two-minute rounds with ten different fighters. Then, finally, comes the big one, the black belt test. Sensei figures that if a boxer can endure ten three-minute rounds of fighting, why shouldn’t his students fight ten three-minute rounds, too? And, as I said, Sensei upped the ante and added a critical condition: ten rounds, three-minutes each, fighting ten different fighters. In other words, Mr. Turner, unlike a boxer, who fights the same opponent for ten rounds as both of the men tire, in Sensei’s school, his students must fight a fresh opponent each round to qualify for a black belt!”