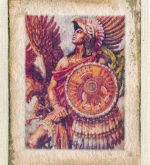 “Mr. Douglas,” I ask curiously, “When and where did Sensei Murphy get his black belt?”

Douglas explains, in “1957, after basic training in the Army, Sensei Murphy was sent to Japan. He joined a karate school and diligently studied under Sato and Yamaguchi, two chief Japanese instructors, where he earned his black belt in what is called, Wado Kai.”

“Wado Kai,” Douglas explains, “is a mixed-style of karate and jujutsu. Some styles focus on hands, like Shonakan, while Tae kwon do mainly focuses on kicking. Wado Kai combines them both, and jujutsu adds knees, elbows, head-butts, chokeholds, arm-bars and we even pull hair.” Douglas gives a friendly snicker. “And you got a lot of hair to pull!”