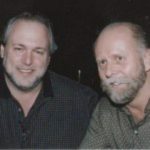 “At my table we have top casino game protection expert Steve Forte, along with mentalist Max Maven.

Max, there are elements of magic and mentalism that are unseen. How does that relate to Richard?”

“First, Jon, I think a very general statement that can be made about magic is that it helps remind us, things are not always what they seem, and that limitations are not always limitations. And, in Richard’s case, he does that both on and off stage, he gives by the example of his great skill, and the success he’s had, it’s a wonderful reminder there are not as many limits as we generally think.”

“Steve, I understand you were first introduced to Richard’s work while dealing craps at the Aladdin Casino. Can you share your impressions?”

“Yes, Jon,” Forte says, “it was at the Aladdin when I was first exposed to Richard Turner’s exemplary sleight of hand. It was many years ago on television’s that’s Incredible. The next day when I went into the Aladdin everyone was talking about this guy on TV that brought the house down. What blows me away, when you list all  the different gambler’s moves, the second deal, push-through, perfect shuffles, most people have one good move that their known for…Richard spent his entire life mastering all the things at the top of the list!”

“Steve, as you know all too well” Maven explains, “slight-of hand, when you are doing the type of work that Richard does, involves, a level of detail that is, microscopic.”
“Max, yes,” Forte adds, “Richard performs moves that I have never seen another cardman perform well…moves that are off-the-scale in terms of degree of difficulty…and he does them flawlessly! For example, how many cardmen have you seen do a false shuffle with a strip-out…All with only one hand?”